Costas Looks Back at the Freeh Report on Costas Tonight–  The next edition of Costas Tonight on the NBC Sports Network will feature Bob Costas looking back at the impact of the Freeh report on Penn State athletics and the family of Joe Paterno.  Costas Tonight will air tonight at 11:00p.m. ET following the network’s coverage of game seven of the NHL Western Conference semi-finals between the Red Wings and Blackhawks.

CBS Produces Golf Special Featuring Golfers and their Dads–  CBS Sports is producing a one-hour special looking at the special bond golf has played between fathers and sons.  PGA TOUR 2013: Golf’s Dads talks with PGA stars and their connection to the game with their fathers.  The program debuts this Sunday at 1:30p.m. ET.

LeBron on the Cover of SI–  This week;s cover of Sports Illustrated features the Heat’s LeBron James: 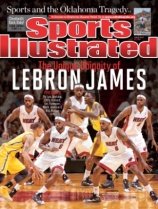