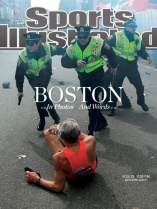 Hawks/Raptors Replaces Pacers/Celtics Tonight on TNT-  Because of the canellation of tonight’s Pacers/Celtics game in Boston, TNT has added the Atlanta Hawks at Toronto Raptors with tip-off at 8:00p.m. ET.  Tonight’s second game will remain the Portland Trail Blazers at the Los Angeles Clippers at 10:30p.m. ET.

NBA Action this Week on ESPN– As the NBA season winds down, ESPN will televise a double header tomorrow night.  At 8:00p.m. the Utah Jazz take on the Memphis Grizzlies with Mark Jones and Jon Barry at the mic. At 10:30p.m. ET Dave Pasch and Doris Burke will call the Houston Rockets at Los Angeles Lakers.

Final Masters Ratings Highest in 12 Years–  CBS Sports released the final ratings numbers for last weekend’s Masters and the number are the best for the network in 12 years.  Sunday’s final round was watched in all-or-part by 37.4 million viewers, up 13% from last year.  Sunday’s rating was 9.4, up 18% over 2012.

NFL Network has Exclusive Announcement of the 2013 NFL Schedule-  The 2013 regular season NFL schedule will be released Thursday night and the announcement will be carried live on the NFL Network.  Andrew Siciliano will host along with analysts Willie McGinest, Heath Evans, Shaun O’Hara and Brian Baldinger beginning Thursday at 8:00p.m. ET.