Tonight’s NFL Turning Point on NBCSN–  This week on NFL turning Point on the NBC Sports Network (NBCSN) host Dan Patrick will look at the key plays of the Patriots/Seahawks, Cowboys/Ravens, and the first six weeks of Washington’s Robert Griffin III.  Rodney Harrison and Tony Dungy will also look ahead to this Sunday’s Bengals-Steelers game.  NFL Turning Point airs tonight at 10:00p.m. ET.

TNT has PGA Grand Slam of Golf-  The big events of the PGA Tour are over, but TNT next week will have coverage as the three of the four winners of the major championships get together for the PGA Grand Slam of Golf.  Bubba Watson, Webb Simpson, and Ernie Els will join last year’s PGA Champion Keegan Bradley in the two-day competition from Bermuda.  Verne Lundquist, Ian Baker-Finch and Bill Kratzert will have the call live next Tuesday and Wednesday at 4:00p.m. ET.

Next ESPN 30 for 30 Film Debuts next Tuesday-  The next iteration of ESPN’s 30 for 30 documentary series will debut next Tuesday night at 8:00p.m. ET.  Benji looks back at the life of 17-year-old Benjamin “Benji” Wilson Jr.: a youngster from Chicago’s South Side, and America’s most talented basketball prospect.  Wilson was the first high school player in Chicago’s history to be ranked as No. 1 and his senseless murder the day before his senior season sent ripples through the city and the nation.

NBCSN Has U.S. Women’s Soccer-  The NBC Sports Network (NBCSN) will have coverage this weekend of the U.S. Women’s national soccer team match as they take on Germany next Tuesday, October 23rd at 7:30 p.m. ET live from Rentschler Field in East Hartford, Conn.  Arlo White, Kate Markgraf and Russ Thaler will have the call.

Figure Skating on NBC This Weekend– NBC Sports will have coverage of the 2012 Hilton Honors Skate America competition.  NHL announcer Mike Emrick will anchor the network’s coverage with analysts Scott Hamilton, Sandra Bezic and Tracy Wilson.  Andrea Joyce will handle off ice interviews.  Coverage will begin this Sunday on NBC at 4:00p.m. ET. 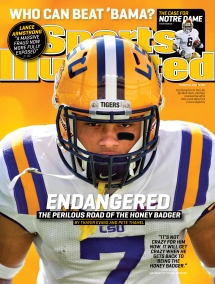